Welcome to My Cooking Formula. Enjoy all my favorite delicious recipes ! close

Easter is on its way , so its time for figolli.  The most common cut out shapes traditionally used for figolli are lamb, heart, duck and dove.  Today I decided to decorate a lamb shaped figolla.  Usually I prefer to decorate the figolli using milk or white chocolate, however royal icing is also widely used in Malta to decorate these almond biscuits.

Today I wanted to experiment a bit, so I decided to decorate my lamb figolla using royal icing bubble effect.  First I covered the figolla using white sugar paste, to give the figolla a smooth texture.  Then I created a hard consistent royal icing mixture and placed a series of dots next to each other keeping on the figolla, making sure to leave little space between each dot so that when the icing dot settles, the dots do not merge together.  Let the layer of icing dots dry for about 10 to 15 minutes and then add another layer of dots, until all blank spots have been filled.  I got this cool idea from the domesticsugar blog.  Finally I finished off my figolla using sugar paste flowers and butterflies. 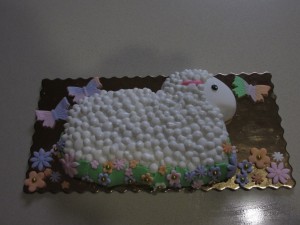